Joe Biden’s statement on nuclear assets prompts the Foreign Office to contact the US Ambassador for the Demarche. 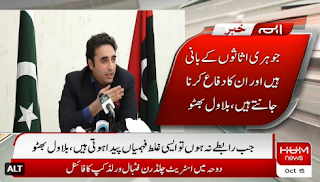 Foreign Minister Bilawal Bhutto Zardari stated that the government has decided to summon US Ambassador Donald Bloom to the Foreign Office for an official demarche regarding US President Joe Biden’s statement on Pakistan’s nuclear assets.

Bilawal Bhutto Zardari stated at the press conference that while addressing an event, President Biden spoke about numerous countries and also made a statement regarding Pakistan, which I have discussed with the Prime Minister. I have requested an official demarche with US Ambassador Donald Bloom at the Foreign Office.

He said that as far as the safety and security of Pakistan’s nuclear assets are concerned, we have fulfilled all the standards of the International Atomic Energy Agency.

He stated that questions regarding the security and safety of nuclear assets should be posed to our neighbour India, which recently fired a missile on Pakistani territory by accident, which is not only irresponsible and extremely dangerous, but also raises concerns about India’s ability to safeguard its nuclear arsenal.

Biden’s statements also follow Washington’s approval of a $450 million maintenance plan for Pakistan’s F-16 force. This reversed the 2018 decision by the Trump administration to suspend such assistance to Islamabad. The United States proceeded with the deal despite India’s strong objections.